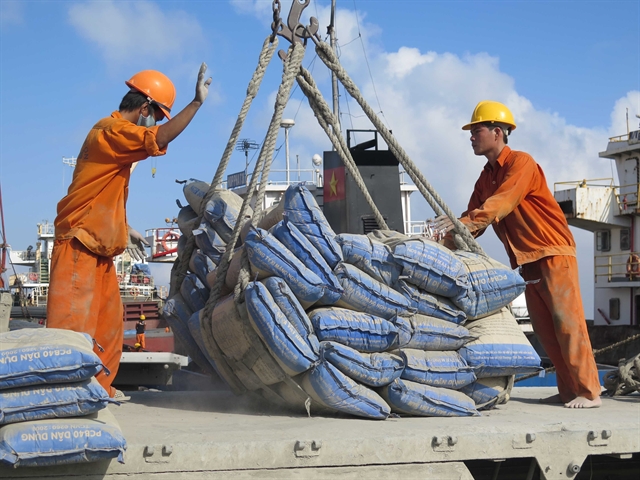 HÀ NỘI — The cement industry is forecast to see a significant increase in domestic sales in 2021, driven by investment in infrastructure, foreign direct investment inflow and the recovery of the real estate market. However, exports are set to slow down.

According to a recent report by SSI Research, domestic cement demand is expected to increase around 5-7 per cent this year compared to 2020. The increase in domestic sales will be fuelled by the increase in infrastructure investment, foreign direct investment inflow into the country and the recovery of the real estate market, which will push up demand for cement, SSI Research said.

Cement exports are expected to be stable as import demand of China remains high amid infrastructure investment, however, it would be difficult to see strong growth like 2020 because China’s cement supply is gradually recovering.

Overall, total sales of cement and clinker are forecast to increase by about 2 per cent this year.

SSI Research estimated that total production capacity of the cement industry would increase by 7 million tonnes, or 7 per cent, due to new production lines that became operational at the end of 2020 and at the beginning of this year. Competition will also increase in the domestic market, boosting cement prices.

SSI Research also pointed out that heavy dependence on cement exports to the Chinese market remained a worry, especially as China could tighten its fiscal policies in the future. China accounted for 57 per cent of Việt Nam’s cement and clinker export and 22 per cent of the country’s total cement and clinker sales last year.

Total sales of cement and clinker were estimated at 101.5 million tonnes last year, representing a rise of 1.5 per cent over 2019.

According to the Việt Nam Cement Association, due to the impacts of the COVID-19 pandemic, domestic sales of cement fell 5 per cent to 56.1 million tonnes in January – November as construction activities were sluggish, especially in the first four months of this year when social distancing was imposed. In January-April, cement sales decreased by 10 per cent from the same period last year.

However, domestic cement sales saw significant increases in May – November as the construction and investment in infrastructure was sped up.

The Government focused on speeding up the disbursement of public investment to drive economic growth in the pandemic, which accelerated investment in infrastructure development.

The cement export increased strongly in the first 11 months of last year, by 15 per cent over the same period, driven by exports to China which saw a rise of 102 per cent in volume. — VNS

Transforming coal into the fuel of the future